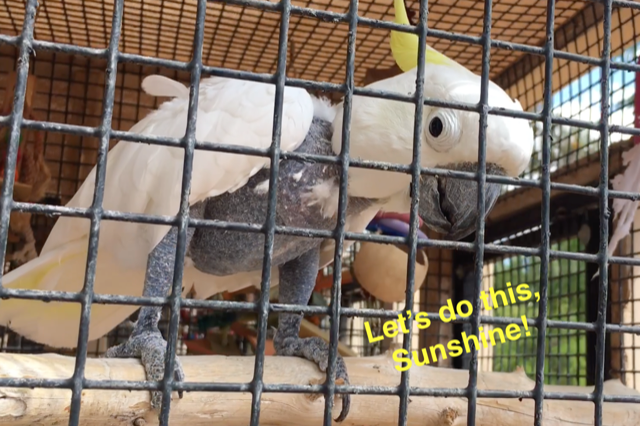 We want to tell you about an animal in need of transport and a home. Meet Sunshine, the sulphur crested cockatoo who has resided at Best Friends Animal Society in Kanab, Utah where he was surrendered 11 years ago.

I met Sunshine 14 months ago when I traveled to Best Friends Animal Society in Kanab, Utah for a seminar I was hired to give through the Pet Professional Guild. I was in charge of presenting and teaching others how to fine-tune our training techniques by working with parrots. I saw the fabulous care their 100+ homeless parrots were given. I was very impressed. My workshops given with the parrots received great reviews and many dog trainers (through PPG) found working with parrots very educational and intriguing. I had the honor of showing a seminar full of dog trainers how amazing parrots are and the concern for their numbers in rescues.

During the seminar, I was approached by two people that worked at the Parrot Garden at Best Friends. They told me about a parrot in their care named Sunshine. Sunshine the cockatoo that was relinquished to them over 10 years ago. Now 11 years ago. They talked about him with tears in their eyes. They said he’s unadoptable because he is too dangerous. I saw caregivers wanting to do the right thing but not knowing what else they could do. I asked if I could see the bird. They introduced him to me through the cage bars.

I saw a beautiful bird that plucked all the feathers off his chest. I asked why he was unadoptable. They told me that as soon as he saw flesh he would attack it. I asked if I could work with him during my 5-day stay. They agreed and told me they were having problems opening his cage to give him food and water because he would attack people’s hands. I gave them a training plan and I began implementing it while I was there.

I taught Sunshine to go to an area farthest away from the door and stay there until cued to do otherwise. During my stay there, I worked with the manager of the Parrot Garden and showed her how to continue the training. Sunshine had plucked his chest bald since he was relinquished to Best Friends over 11 years ago. I let them know we could work on changing that behavior as well. Before I left, I said “This bird is craving attention. He is very receptive to the attention given through training AND, with training, and I think he is adoptable.” The caregivers started crying with the potential of Sunshine being adopted. I left Best Friends a few days later for my return flight back home. I left a little piece of my heart there with Sunshine.

Best Friends Animal Society got in touch with me four months later. They asked if I would come back out and work with their team focusing on training plans to increase the quality of life for the 100+ parrots in their care, all needing homes. I flew out again last August. There I spent three days giving a workshop and working with the staff incorporating training and behavior modification plans to get these birds adopted and into homes where they needed to be. I was quickly asked to watch Sunshine’s training progress since I was out last. I couldn’t have been more pleased and Sunshine was stationing and eagerly targeting his beak to a stick. I left yet again, leaving a little piece of my heart with Sunshine.

In March of this year, we had to put Sam to rest. He was our adopted, blind Amazon we transported from A Helping Wing Parrot Rescue in New Jersey, to The Animal Behavior Center in NW Ohio. How he passed could have been prevented with proper education. We had an empty cage and a hole in our hearts. After he passed, we wanted to open a spot in the center to another animal in need. Several people mentioned Sunshine and we did think about a spot for Sunshine as well. We contacted Best Friends and the ball was set into motion. His transport from Kanab, Utah to Sylvania, Ohio begins next week and your donations are helping make this happen. Sunshine will be up for adoption through Best Friends during his training at The Animal Behavior Center.